Kamla Foundation works in India with people who are on the margins of society; the poor, low-caste, tribal people, especially women – to help them build and sustain their individual, family and community livelihoods.

Our Vision is an India, where all people have an opportunity to live in dignity, free from hunger, deprivation and marginalisation.

Many people believe Indians today are growing rich under globalisation and the Information Technology revolution, but these new opportunities have only benefitted a minority of the country. This new wealth has also tended to go down caste lines with the higher caste members getting the lion’s share of the profits.

Although Indian law bans caste discrimination, the cultural habits of millennia cannot easily disappear, especially in areas where there is little education and awareness, as in many rural communities. There is a huge amount of prejudice against and segregation of the lowest classes, particularly those known as the ‘Untouchables’. They are considered by many to be outside the caste hierarchy and consequently, ‘sub-human’. They have historically been made to do the most menial and dirtiest tasks and treated far worse than animals.

Because of their historical standing, the Untouchables – or ‘Dalits’ (meaning ‘downtrodden’) as many of them prefer to be called politically – are, as a group, the most economically deprived. The majority live in remote villages, seeking manual labour work within agriculture or on the peripheries of large towns. Unemployment is rife, schools are virtually non-existent and living conditions are very poor, often lacking in basic amenities such as clean water. 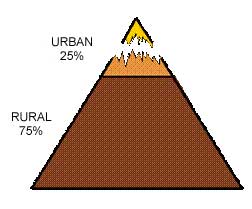 Within the Dalit community, women experience even greater difficulties and hardship. In most cases, the women are classed as secondary level beneficiaries. Within these communities women are poor, asset less and invisible on the socio-economic front. They are therefore engaged in even greater menial work than their spouses and often resort to subsistence occupations to eke out a meagre income.

However, the role of women becomes crucial in poor families where the male contribution to the household income is low. Some men spend almost all their income on personal consumption like liquor or tobacco. As a result, the family is heavily dependent on the earning potential of women (and or children) for survival and a significant number of women are sole contributors to the family income.

Henceforth, Dalit women end up working as bonded agricultural labourers with low/under paid wages, in spite of their knowledge and skills in other areas of life. The extreme perennial economic deprivation for women has also resulted in illiteracy, malnourishment and poor health conditions. In addition they are overworked, oppressed and victimised by entrenched patriarchal attitudes within the family and the wider community.